Profile of an Antiquities Dealer 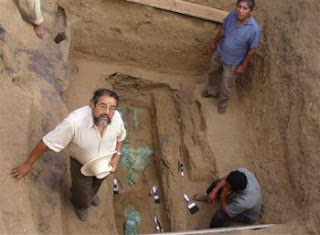 The Associated Press has an extended profile of Leonardo Patterson. An antiquities dealer from Costa Rica who is currently being investigated by German and Spanish authorities. In April, police in Munich seized more than 1,000 objects from his warehouse.

Pictured here is Peruvian archaeologist Walter Alva. He received a catalog of Patterson's antiquities in 1997:

[H]e saw more than 250 ancient Peruvian pieces, mostly from tombs raided in the late 1980s. There were necklaces made of gold and lapis lazuli from la Mina in northern Peru. There were copper masks and a necklace made of 30 gold spiral-shaped ornaments from Sipan, the center of the Mochica culture dating to 200 A.D.

Alva was not surprised that many of the pieces had ended up in private European collections.

"There is a very active market in the United States and Europe," said Alva. "We have to eliminate this idea that those who collect archaeological artifacts are cultivated people."

He asked Interpol in Lima to investigate. Interpol in turn asked a Lima court for an international arrest warrant for Patterson in 2004. Four years later, there has been no ruling, according to Interpol officials in Lima.

Patterson is accused of selling fakes and forgeries as well as looted antiquities. It seems Patterson may have been connected in some way to the looted Peruvian gold headdress which was recovered from Patterson's lawyer's office in 2006.